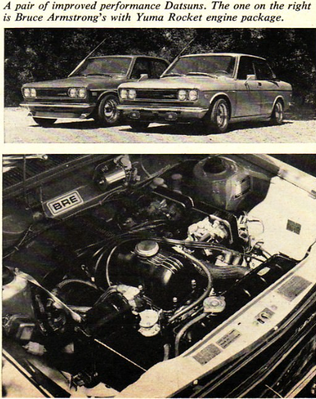 Suspension: The Townewood Racing Productions 510 with fiberglass body panels and wide 13x7 American Racing Libres is most similar to the Brock Buster. While all three of the cars with the BRE suspension upgrades (excluding the Armstrong 510) had the same springs, stabilizer bars and Koni shocks there is no mention in these articles of any fabrication work done to the front control arms or rear sub frames on these cars similar to the Brock Buster.

Performance: The two cars with the Yuma Rocket put out an impressive 133 horsepower. The Brock Buster engine was similar to the Hot Rod Magazine Project 510 with the standard L13 head. The major difference being the Brock Buster had twin Weber carburetors on a Canon intake. In the Motor Trend article Brock claimed 125 horsepower with this setup.

Other: The Townewood Racing Productions 510 shared other similarities with Peter Brocks personal street 510. It also has a rollbar (clearly visible in the pictures) and a five speed transmission and aluminum rear drum brakes. It is not noted if the rear seat was removed and that area carpeted. This car is the only other car I have seen the BRE gauge cluster in other than the Brock Buster. It also appears to have a standard 510 drivers seat not a BRE fiberglass racing seat. 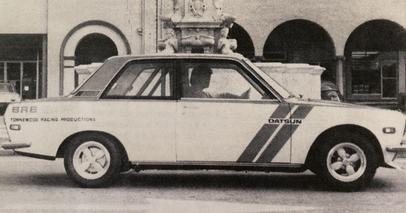 In addition to Pete Brock's Screaming Yellow Street Datsun 510 there were three documented street Datsun 510's that were modified to varying degrees by BRE.

In a two part series in March and April of 1972 Hot Rod magazine detailed the modification of a Hot Rod Project Datsun 510 with the assistance of BRE.

In the March installment, the owner of Sun Datsun in Whittier California loaned a 510 to Hot Rod Magazine for the project. Hot Rod started with the BRE Mulholland Kit including front and rear springs and front and rear stabilizer bars. They added Koni shocks and a set of American Racing Libres in 13x6 which did not require the flaring of the factory fenders. The suspension changes lowered the 510 a reported 2 1/4 inches. Tested on the skid pad, the Sun Datsun 510 recorded .823 G's. To complete the first installment of the project Hot Rod added a BRE Cyclone header and exhaust system.

improvements for the Sun Datsun. They sought additional performance while

Wherabouts of the Sun Datsun 510 - unknown.

Cars International Magazine featured a BRE street Datsun 510 modified by BRE for Bob Towne of Phoenix Arizona. This car was modified beyond the level of the Sun Datsun with an L16 SSS head and five speed transmission. According to Cars International Magazine, bolted to the SSS head was a BRE intake manifold and a pair of Mikuni carburetors. This car was also mentioned in the famous book "How To Modify Datsun 510, 610, 240Z Engines and Chassis" on page 143 where they note it had the full "Yuma Rocket" engine package (see below).

This car was painted in red, white and blue as a clone of the Morton BRE race car, #46.

Bruce Armstrong and the "Yuma Rocket" (Road and Track):

In this article Bruce Armstrong, a Yuma Arizona Datsun dealer brought his 510

a street-able ride. According to Road and Track the car was already modified with

Peter Brock and BRE installed an under development 133 horsepower L16. This motor package later became known for its installation in this car - the "Yuma Rocket". "Yuma Rocket" was the name of the engine package - not Bruce Armstrongs 510.

Whereabouts of the Bruce Armstrong 510 - unknown.