Brock Buster giving a Dino hell in the 1984 Carlsbad Grand Prix (Notice our tribute to John Morton...."46" on the door in shoe polish!).

​​​​PL510175886, the 510 destined to become the future Brock Buster 510, started life as a Safari Brown colored 510 manufactured in July of 1970 and purchased by Southern California auto enthusiast Rick Thigpen.

Rick Thigpen, who grew up in the Southern California car scene, wanted to build a street legal Trans Am 510 in the image of the BRE 510's that were dominating the Trans Am 2.5 series across North America. Logically he looked to Peter Brock and BRE (in nearby El Segundo, CA) for the parts and advice.

​When asked to install the suspension upgrades and rework the mounting points Thigpen notes that BRE was just too busy with the ongoing Trans Am season and referred him elsewhere. According to Thigpen, Brock referred him to none other than Troutman and Barnes to rework the front and rear suspension per Brock's guidance.

Troutman and Barnes were legendary race car fabricators based in Los Angeles and were the designers and builders of the iconic Reventlow Scarabs,  Troutman and Barnes Specials and the first of Jim Hall's Chaparrals. Later, in 1967, Troutman and Barnes and BRE built the Hino Samurai. According to Thigpen Dick Troutman himself modified the Brock Buster's front A Arms and rear subframe. Thigpen has retained a cleared check to Dick Troutman for $557.52 with the memo "suspension relocation". 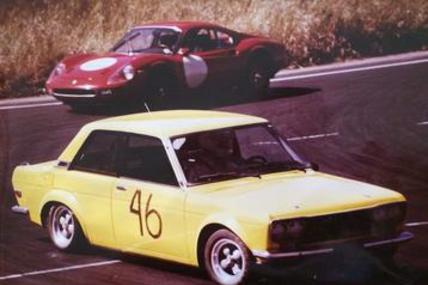 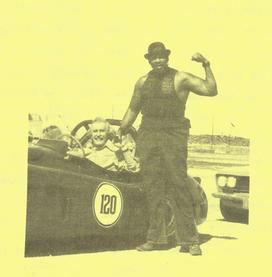 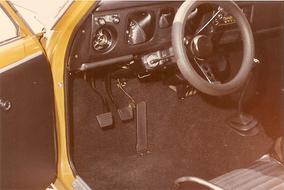 Legendary Big Willie poses with Fred Lake and his vintage race Jaguar XK120. Next in line - Bob Schulhof and the Brock Buster. 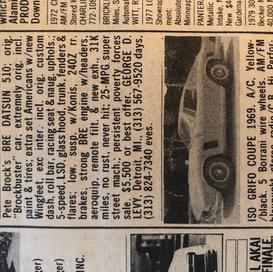 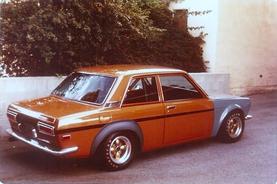 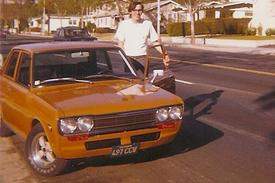 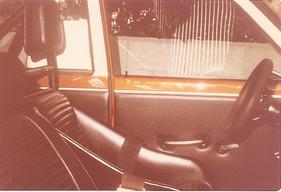 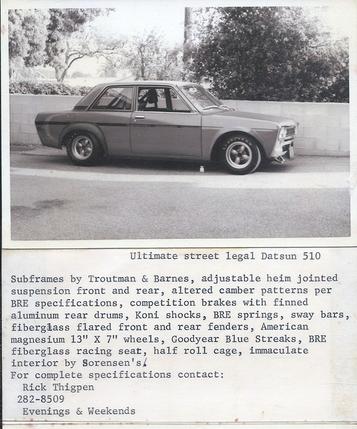 For the installation of the BRE racing seat and rollbar fabrication Brock referred Thigpen to Bruce Burness then of Burness Auto Design. Bruce Burness was a former Shelby American employee along with Pete Brock. Burness was also part of the team put together by Peter Brock to design and build the Toyota JP6 Prototype.

Thigpen hired Sorensen's of Pasadena, CA to perform a $352 interior renovation including carpeting the rear seat area where the seat had been removed, reupholstering the passenger seat to match the black upholstery and white stitching on the drivers side BRE racing seat and neat and clean improved door panels.

​Prior to the ultimate completion of his project Thigpen reluctantly decided to part ways with PL510175886. 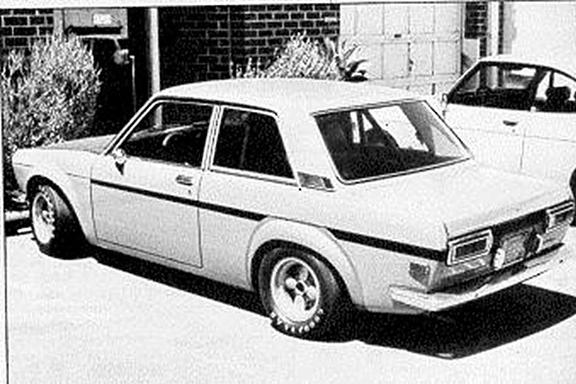 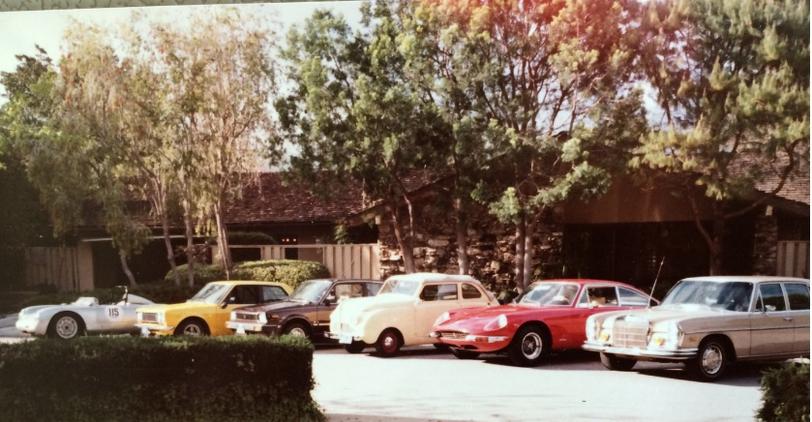 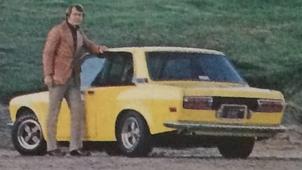 Rare photo of Brock Buster prior to yellow re paint parked in BRE parking lot at 137 Oregon St., El Segundo, CA circa 1972. 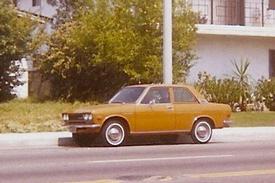 Peter Brock posing with his Brock Buster circa 1973 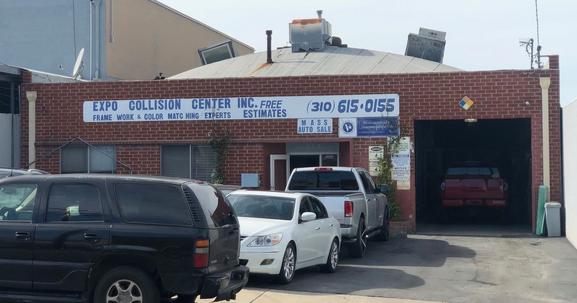 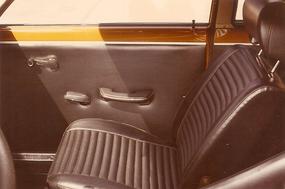 At BRE the Brock Buster was completed. It received drivetrain improvements including a blueprinted engine fitted with a semi-race cam, headers and full race forged pistons and a remote BRE oil filter. The standard 4 speed transmission was replaced with a 5 speed unit. The battery was relocated to the trunk. Additional Stewart Warner gauges were installed in a custom cluster. Finally the car was treated to its now iconic yellow and black re-spray.

George Damon Levy, then in Michigan, briefly owned the car in 1980 after locating

and purchasing the car in Virginia. Due to insufficient storage - and an unwillingness

racer and back on its way to California.

​​​Robert Schulhof was a founder of Southern California's Vintage Auto Racing Association. In the 80's the Datsun 510 (now a staple of VARA vintage racing) was still too modern to participate with VARA, but the Brock Buster was vintage raced in the Vintage Grand Prix Carlsbad '84 which had less restrictive entry qualifications. For the Vintage Grand Prix Carlsbad '84 the "Screaming Yellow Zonker" was loaded up with a set of Goodyear Racing Slicks in the empty back seat area, driven from Los Angeles to Carlsbad, raced, and driven home! The Brock Buster was also run at Reeves Field on Terminal Island with "Big Willie" and "The Brotherhood of Street Racers" at a "Run What You Brung" VARA event.

The Brock Buster was maintained in original and running condition and registered in California until 2000 logging 73k miles. It was used as a typical modified - yet still street legal - Datsun 510 in Southern California. That included equal parts canyon carving between the San Fernando Valley and Malibu and running errands. The Brock Buster was commonly seen in the Chatsworth High School parking lot in 1985 and 1986.

In the late 90's the car was relocated to Arizona with its owner and shortly thereafter experienced a small engine fire that knocked it out of service. It was then put in storage in Arizona for 15 years.

The Brock Buster has remained in the Schulhof family for the last 42 years.

In the words of Autoweek editor and former owner George D. Levy, "the Zonker (ed. another name for the Brock Buster) was
a hit. Instantly it  became the ideal upon which hundreds, perhaps thousands of privately modified 510's were based".